We made our first visit to Break Escape earlier this year to play the terrifying Nerve Klinik, and the excellent Crystal Maze-like Sands of Time, and were left suitably impressed. This weekend, with a free Bank Holiday, we stopped off at Loughborough again on the way to Escapologic Leicester, playing at Hour Escape first, before taking on Boiling Point…

“You and your team are tasked with defusing the bomb planted deep in within Summerhill police station. Hold your nerve, be patient but you’ll also need to react quickly before time runs out!” 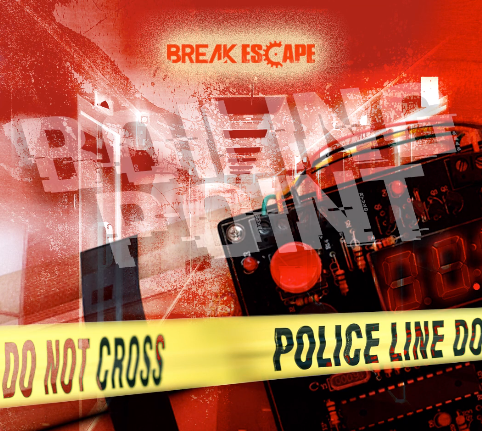 After the perfectly creepy design of Nerve Klinik, and the excellent Ancient Egyptian tomb of Sands of Time, the theming in Boiling Point is a lot less eye-catching – it’s an office based game, so the decoration doesn’t take the centre stage. The game is spread out through the Commissioner’s office and the evidence room, and everything looks the part with a good immersive feel.

It’s the puzzles that are the main talking point here though – office based games tend to be quite generic, but that’s one thing this room definitely isn’t. There’s some very clever ideas implemented, some of which will make you laugh, and some of which will just leave you completely puzzled. It’s definitely a room with mixed difficulty and puzzle types – one task in the room is quite common, and requires a lot of concentration, while another is something we’ve never seen before, and adds a clever spin on to something quite simple.

As well as defuse the bomb, you also have to collect the DNA-ridden objects that are to be used as evidence against the group of bombers – this process made for a really enjoyable task with a bit of a desperate scramble to find them in time.

Overall, this is another solid game from Break Escape – an immersive setting with great, enjoyable puzzles. There were also some funny hidden jokes throughout the room that we found a couple of – a nice touch! We can’t wait for their new Enchanted Forest game to open…

Host: Our host was Jacob who gave us a good quick brief, before hitting us with perfectly timed clues. We had a good chat about escape rooms as well – always a plus to have an enthusiastic host.
Clue System: Clues were delivered via the commissioner’s computer.
Success? Yes, we got out with around nine minutes remaining, somehow making it to 6th place on the leaderboard.